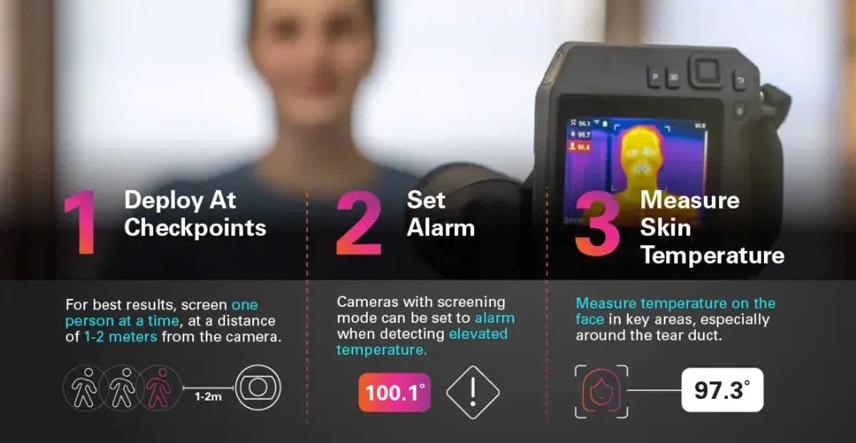 The coronavirus spreads to almost all around the world and has been infecting a lot of people across the globe. If a person is infected by this virus, they will have a fever, which is one of the main symptoms of the coronavirus. This is why public facilities and buildings, such as restaurants, companies, hospitals, shopping centers, airports, harbors, and many other places use a thermal detection system in order to detect people’s body temperature.

This system is applied to 2 different body temperature detectors, which are thermal guns and thermal scanner camera. These 2 detectors can detect the initial symptom of the coronavirus.

It can be said that a thermal gun is the most used body temperature detector used in so many buildings and places. It looks slightly like a barcode scanner. It is because a thermal gun is practical and easy to bring anywhere. Moreover, it is also more affordable compared to a thermal scanner with a camera. The thermal gun emits infrared rays which can collect the energy emitted, transmitted, and reflected from the object. The sensor featured in the thermal gun will then change the data of energy into a measure of the heat energy of the object.

It is really easy to use a thermal gun. You just need to point it to an object as close as possible without touching it. After that, the thermal will automatically detect and inform you about the temperature of the object you check.

A thermal scanner with a camera can measure the temperature of each body’s part. It can detect someone’s body temperature from a distance of 0.8 meters to 1.5 meters. No one has to hold it as well. So, it is believed that this thermal scanner can minimize the spread of the coronavirus than a thermal gun. A person just needs to stand in front of a thermal scanner and it will automatically scan the body temperature. This tool features a memory card to save the data that can be directly used without any special installation.